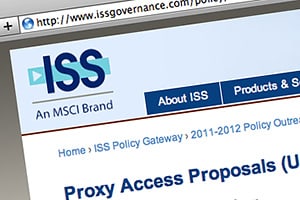 Two weeks after SEC lawyers granted six corporations approval to exclude “proxy access” proposals from their proxy materials, USPX members are already submitting an updated versionof that same proposal to other corporations. Updated language addresses the flimsy pretexts for the lawyers’ decision, as well as implementing improvements to the proposal language that shareowners have recommended.

The original proposals were based on a USPX model proxy access proposal released on November 10, 2011. Today, the USPX announces an update to that model proposal, which shareowners can submit to corporations. Shareowner Kenneth Steiner received an advance copy of the update, and he has already submitted proposals based on the new language to Medtronics (MDT) and Forest Labs (FRX).

By limiting the number of proxy access nominations to less than a majority of board seats, the second version provides a strong safeguard against proxy access being used to pursue a change in control at a corporation. While Version A also seeks to avoid change in control issues, it does so primarily by prohibiting coordination of nominating groups, not by restricting the total number of shareowner nominees.

A 16 page release document presents the text of both versions followed by instructions for submission, background information and the history of proxy access. A section provides a detailed explanation of Version A. A shorter section follows that to explain how Version B differs from Version A.

We welcome feedback, which can be posted directly on this page (log-in as a USPX member to do so) or send an e-mail at [email protected].