The key is a classic symbol of authority or control. In the center of the seal, a key passes from one hand to another, signifying the grant of authority that is a proxy assignment. The seal’s outer ring contains the Latin phrase “Populus Constituit”, meaning “the people establish” or “the people decide.” This declaration appears with two stems of flora: an olive branch, a standard symbol for harmony and accord; and a stalk of wheat, the universal icon for germination, growth and abundance. Bound together they stand for peace and prosperity. 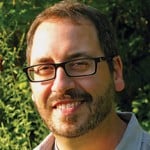 The bound olive branch and wheat stalk are particularly significant for our movement, representing the two primary motivators of our members. Some embrace our cause because they believe the proxy process can be used to address corporate abuses, including pollution, exploitative work practices or genocide. Others are motivated more by economic concerns, anticipating that the proxy process can eliminate entrenched boards and address profound corporate governance problems including excessive executive compensation, cronyism and financial abuse. While our two factions are occasionally at odds, they have mostly worked together in harmony. We are finding that peace and prosperity are not incompatible. Indeed, one is largely impossible without the other.

While the seal’s spiraling motif was slightly influenced by the Japanese Yin-Yang symbol of perpetual balance and by M. C. Escher’s “Drawing Hands,” the image as a whole has a greater influence: the historic illustrations of the American Constitution Era, such as those found on U.S. currency. In this way, the seal recognizes the important work of Enlightenment Era thinkers and America’s founding fathers who put their beliefs into practice. 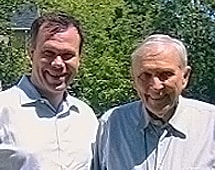 Glyn and Thomas Holton developed the

The seal was designed by graphic artist Ed Pontes, who describes himself as “a hardworking ‘Joe’ from ‘Smalltown America’ that strove to put his own stake in the ground.” Born into a family of first-generation Americans from the Azores, Portugal, he worked his way through college at local farms as a cowhand and farm worker. He cofounded his first marketing and design firm, Pontes/Buckley Advertising, in 1989, and built the agency to serve hundreds of local and international companies. After more than a decade of success, Ed dissolved the agency and opened WirePike Studio, a private consultancy that allows him to focus on illustration, art and design, primarily for print and web-based media.

Today, Ed resides in Brookline, MA with his wife and three kids.Glyn Holton proposed the phrase “Populus Constituit” for the seal. Our Latin expert—Glyn’s dad, Thomas J. Holton—helped us get the declension and conjugation right. Tom Holton died in August 2009, just as the seal was being finalized. He was 87.